Putting Our Money Where the Salmon Are

When we started Spruce Camp, we committed to giving back 2% of Gross Annual Sales each year to one or more nonprofit organizations supporting wild North American fisheries, both coastal and inland.  We want to focus our resources on those ecosystems and communities essential to the strength of wild salmon populations.  These keystone species are linchpins in broad, geographic and species-diverse, life cycles.  The area of focus is enormous.  The Tongass is the world’s largest temperate rain forest and the largest U.S. National Forest.  As such, it encompasses prime spawning habitats for all North American Pacific salmon species.

While the exact accounting is forthcoming, our decision has been made regarding the 2019 recipient.  We will make our gift to the Alaska Wilderness League in support of their strong and recent advocacy work on behalf of the Tongass National Forest.  With offices in Anchorage and Washington D.C., is well-positioned with its partners to make a difference for this wilderness as the Federal government threatens existing Roadless provisions.  The post below taken from Alaska Wilderness League’s website (https://alaskawild.org/places-we-protect/tongass-national-forest/), describes the issue and their work well.

In September of last year, because of a request from the State of Alaska, the U.S. Forest Service began evaluating a state-specific Roadless Rule. Guided by conversations between Alaska Governor Mike Dunleavy and President Trump, the Forest Service released its draft Environmental Impact Statement (DEIS) in November of this year outlining its preferred course of action that would entirely exempt the Tongass from the Roadless Rule.

The public comment period on the Alaska roadless DEIS ended on December 17, and during the course of 60 days, more than 400,000 people and dozens of local tribal, government, business and national recreation groups flooded the U.S. Forest Service with comments opposing its plan to undo safeguards that prevent clearcutting and road building in the Tongass. 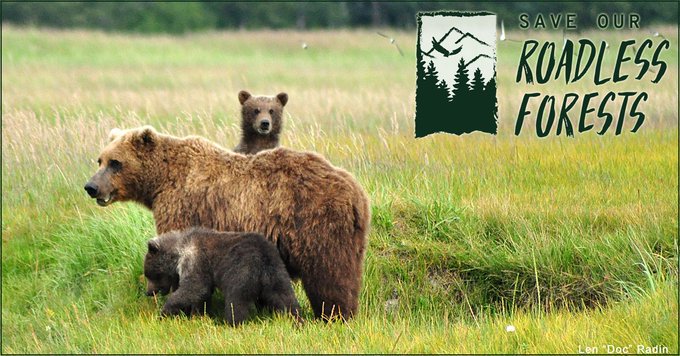 Removing roadless protections in the Tongass would strip protections from more than nine million acres of national forest, opening it for the timber industry to begin clear-cut logging. The pristine temperate rainforest in the Tongass is home to critical salmon habitat that provides a foundation for the local fishing economy and sustenance for abundant wildlife including America’s highest concentration of brown bears and bald eagles.

Throughout the week the League worked with partners from a variety of backgrounds to fight back to keep roadless protections for the Tongass. We worked closely with two Alaska regional groups — Sitka Conservation Society and Southeast Alaska Conservation Council — along with other national and state-based partners to ensure the right voices were elevated to the right decisionmakers. Through these partnerships, individuals came all the way from Southeast Alaska to the nation’s capital to join us, including tribal leaders, grassroots activists and a commercial salmon fisherman.

Please help us protect our environment through direct action and indirectly by supporting organizations like the Alaska Wilderness League. #getoutside

Legal Disclaimer: Statements regarding dietary supplements have not been evaluated by the FDA and are not intended to diagnose, treat, cure, or prevent any disease or health condition.

Not registered yet? Register